Dealing with Stress in the Workplace 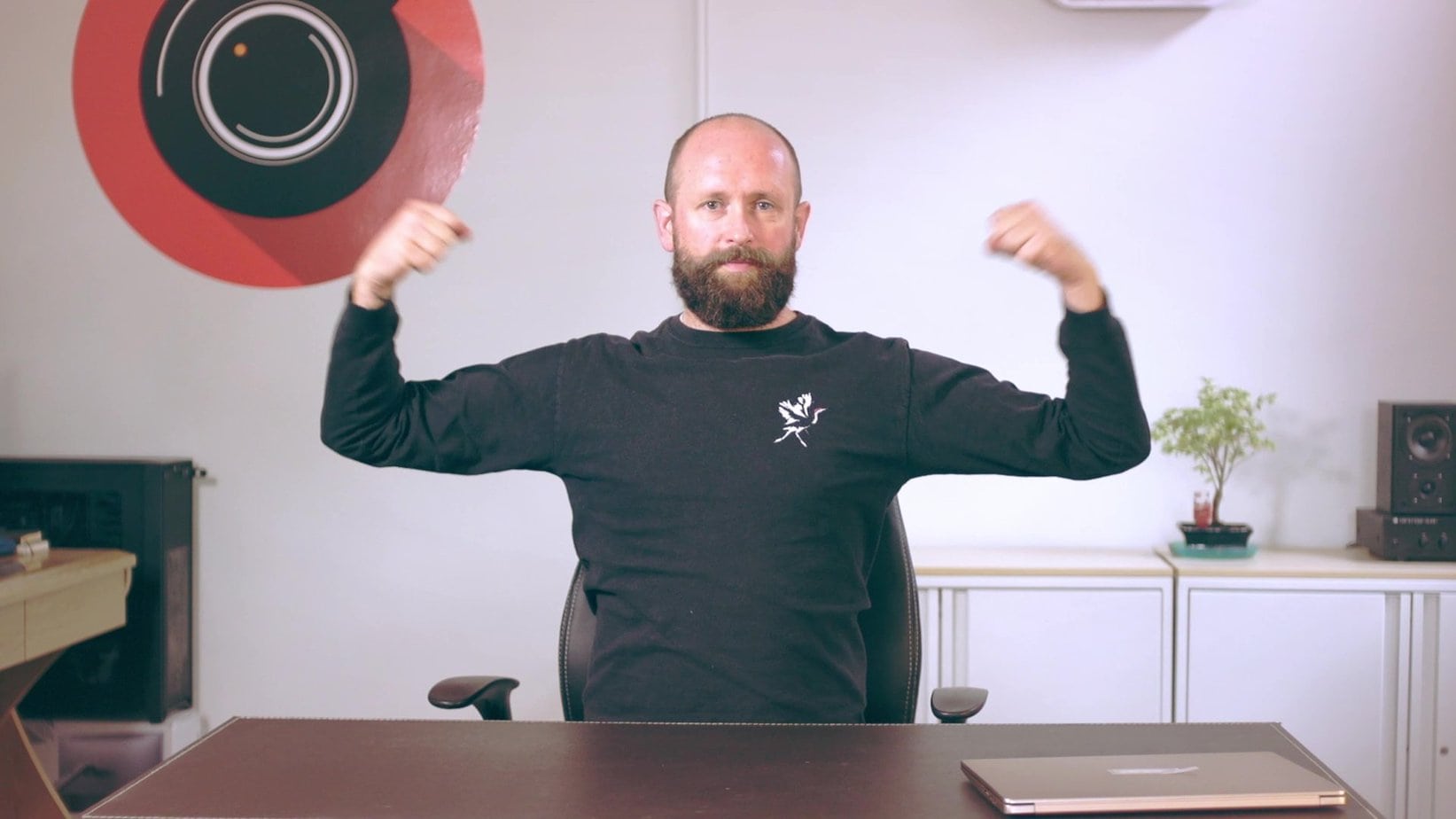 I’m lucky enough to be able to work for myself now but I spent the best part of 20 years in a corporate career.

Whilst I didn’t always feel that way, many times over the near two decades people would frequently comment on how un-stressed I was at work.

My usual reply was, “Oh, it’s because I do martial arts every day and get to punch pads at the end of a the working day”, inside I was often thinking, “otherwise, I’d probably be punching half of my co-workers”. I’m sure even the most ardent pacifist has had similar thoughts!

I worked in IT and Technical Support – which can quite often feel like you are one of the whipping boys in a business – but for me it was a way to refine my yielding and redirection skills learnt in Tai Chi. If you’ve ever tried to get a straight answer out of an IT person about when something will be fixed, you’ll know what I mean! I was a master of the art 🙂

I didn’t suit that world, and I straddled both IT work and being a martial arts instructor for many years before the balance of having two full time jobs shifted over to my martial arts business and I made the leap full time.

Despite being out of the traditional workplace for quite a while now, I remember working alongside some people whose heads I often thought would explode with stress. Now several years later, I know that at least some have developed long term health conditions, from depression and anxiety, and high blood pressure, to chronic physical problems related to bad backs, and shoulders – quite often because of poor posture. Stress has an incredibly bad effect on posture.

Personally, my own mindset – right or wrong (right for me!) – was that as long as I was working for someone else, I would never take the roles I had too seriously. My focus was on creating a martial arts empire, my day job was a means to an end until the point when I could leave and become a full time teacher.

Having had a foot in the often seemingly mutually exclusive camps of health/fitness and the corporate world, I’ve been in a unique position to see how each one can benefit the other: a corporate career can give you a steady income whilst you develop other areas of work or study, whilst a dedication to martial arts (or other related activities) can keep you healthy in body – and more importantly in mind – as you traverse the rocky terrain that a day at work often feels like!

My Tips on How to Beat Stress in the Workplace

Perhaps the first tip on how to avoid stress in the workplace is to remember ‘it’s just work’. Now, I realise that I was an IT (sort of) professional and if I had been a surgeon, ambulance driver, pilot, or a myriad of other professions that hold people’s lives in their hands, that is (hopefully) not an attitude you can go to work with!

However, we all know some people who take their role, themselves, and their own importance, a little too seriously. If you’re humble enough to realise that you may fall into that category, then taking a step back to realise this and ask yourself, “Is what I am getting stressed about THAT important?” could make you help you put things into perspective.

You are more important than your job, living with stress for any extended period should be taken very seriously and addressed with the utmost importance – don’t be what I used to call a ‘workplace hero’. If you’re ill, take time off. If you’re stressed, focus on what is most important – your health!

This was an absolute game changer for me and the number one reason I managed to stay sane in the corporate world.

Within my first 7 or 8 years of an IT career, I had been made redundant twice. One of those times put myself and my family into quite a stressful financial situation.

There is no certainty in the workplace and personally my own experiences led me to believe that there is no such thing as loyalty either for the most part. Companies will only keep you whilst it is financially viable – and generally speaking pay you as little as they can get away with if it comes to the point of having to dispose of you as an employee. Having a second income, even if it’s just a small one initially, can really help offset this financial worry.

Where I found it helped my mindset most in the workplace was the switch I made when I realised that it was myself setting my own value.

Let’s face it, we very rarely get that pay-rise or end of year bonus that we think we deserve. When you work for yourself, you decide what you are worth, and that is incredibly liberating.

I worked for a large insurance company – that will remain nameless. Often it was like listening to politicians at work as the senior management plied the workforce with propaganda about how well the business was doing for 11 months a year, up until the 12th month when it was approaching bonus time – when we were then warned of a decline in profits, rocky roads ahead, and a tightening of the belt.

There were also one or two (or five or six) occasions when a manager told me that my pay increase wouldn’t be what I wanted it to be. Sometimes, because we had had disagreements on the best way to go about tasks at work. I didn’t get on well with many bosses.

It’s incredibly liberating when you get to the point where your second income more than makes up for the lack of a pay-rise or bonus – closely followed by the look on the face of your management when they know they’ve lost the upper hand – the control of the purse strings!

You’ve taken back control – and one of the main causes of stress – not being in charge of your own life. There are so many ways to make a second income these days – Google will tell you how. All it takes is imagination – and a strong will!

“Have you got ants in your pants?” was a question often put to me as a child, as I generally had an inability to sit still for long. This is still the case now I’m in my mid-40’s.

I’m grateful to those ants for keeping me in perpetual motion, as we well know by now, that sitting down for long periods of time is really not good for you.

The classic office based conditions of the back, wrists, shoulders, necks, tension headaches, and of course – stress,  can all be offset by movement.

It could equally be movements from qigong, tai chi, Pilates, dance, yoga, general stretching and warm up exercises – anything you can do, intersperse your day with it. Long periods sat working in front of a screen, becoming increasingly hunched over a keyboard are completely unnatural and detrimental to your physical health – and when that starts to wane, it’s a surefire bet that your stress levels will increase.

Make sure you get out on your lunch breaks, look away from your screen, find ways to move your body – and take the stairs!

What is more, by being physically active outside of the workplace, having hobbies which require physical movement ensure that you effectively have an antidote to the stresses that inactivity place on our bodies and minds in the incredibly unnatural 9-5 office world.

One of the first things you’ll notice if you study someone whose stress levels are rising, is the increase in the breathing rate. Call it the fight or flight syndrome, call it rising cortisol levels, or call it an annoying line manager…  however you refer to whatever causes the shortness of breath, it’s not good for your stress levels and ability to stay calm.

Quite often bad posture from sitting in a chair will cause you to breath in a shallow way, which will then trigger the body and mind to enter fight or flight mode – and then you’re trapped in a cycle of stress that’s hard to break!

Seriously, after three breaths you’ll feel transformed. The trick is, remembering to do it!

What I have had some clients and students of mine do is to set an alarm – on the hour – and when it goes off, it’s the reminder to take those deep breaths. Just three complete breaths an hour could reduce your stress incredibly.

Whatever it is you are passionate about – intersperse it throughout your day. For me, more than anything else, that’s tai chi or tai chi related activities. It takes me away from whatever it is that I am doing and it allows my mind a few moments to calm down and get a fresh perspective and energy.

If you don’t have a passion for anything – and amazingly, many people claim to not have – find one! There’s an idea for another blog post but if you really have a hard long think about what it is that lights that spark inside of you – an activity, sport, person, book, science, history, gardening, holidays, a language, a pet…. whatever it is, take yourself out of your immediate mental surroundings and spend a few moments immersed in something else that benefits you above and beyond anything else. Listen to a couple of minutes of an audio book, look at a photo, do some exercise, use an app – the real and virtual worlds are full of distractions, just find one that benefits you – not one that serves as mental bubble gum (all flavour, no nutrition).

Or – an alternative point of view…

Is stress inevitable? I’d say, yes it is – also useful. As human beings we’ve evolved to only keep things which are useful for our progress. Imagine our ancestors evolving without stress and heading out for a morning of berry picking just as a sabre tooth tiger spots you out the corner of its eye, as it’s just thinking about breakfast. Personally, I’d have liked my cortisol to have spiked pretty rapidly at that point and the fight or ‘get the hell out of there’ response to have forced me into a rapid retreat.

Without stress, we wouldn’t have evolved. The problem is with prolonged periods of stress, where we just can’t calm ourselves down.

So, instead of having the kind of stress where you think ‘I have so much to do and I can’t focus or get anything done please leave me alone!!!’, turn it into the type of stress that gives you the determination to deal with the immediate danger (a sabre toothed tiger in the form of a demanding email perhaps) and use that immediate spike of cortisol to deal with the task (get the hell away from the tiger) or confidently leave it until later (run up a tree and eat your berries and wait for the tiger to go).

If you can allow stress to work for you – which is what it’s really for – rather than against you, as seems to be the case a lot of the time, and use some or all of the techniques above (and any others that you know already work for you), to get you through the day in a calm and rational manner, then this silent epidemic which causes us so many mental and physical health problems may not be so bad after all.

0 responses on "Dealing with Stress in the Workplace"