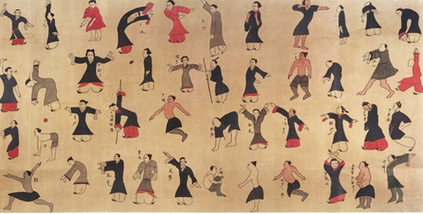 One of the oldest and most famous of all qigong sequences is ‘Ba Duan Jin’, or ‘Eight Pieces of Brocade’, also known as ‘Eight Treasures’.

Visit parks across China in the mornings and you’ll see individuals or groups practicing a variation of the form which has been passed down and woven through the generations like a silken brocade for over 1000 years.

You can learn the form with detailed tutorials on each move on our website.

Ba 八 means eight, Duan 段 refers to benefits gained from the practice of the exercises but literally can be translated as holding or carrying something , and Jin 锦 means silk.

The image of silk is used a lot in the soft styles of Chinese martial arts and exercises. Culturally in China it was incredibly significant, and its 3000 year history is quite literally a part of the fabric of what is the longest lasting civilisation that the world has witnessed (that we know of!).

The movements should be smooth and flowing like silk, or after the practice has been completed you should have a smooth silken feeling throughout the body.

If you imagine the fascia – all of your connective tissues within the body – as a smooth silken material which over time with poor posture and incorrect or overuse becomes stressed, thickened, and inflamed. Think then of a well made bed with a silk sheet, just perfectly tucked in and smooth. Compare that with a crumpled mess of a sheet after a bad night’s sleep!

With 八段锦 you are smoothening, straightening, repairing your fascia until it’s resembling a fine piece of silk – and you are flowing with good health and vitality.

Eight Pieces of Brocade can be traced back to the Song dynasty, which lasted in China from 960-1279CE.

During this period of time China is looked back upon as the most advanced civilsation on earth and responsible for the invention of the mass printing of books, gunpowder, and the compass – although they were responsible for the introduction of foot binding and were eventually conquered by the Mongols, so it wasn’t all good!

As is the case with many styles of martial arts and qigong emanating from China’s rich past, it encapsulates theories from Confucian, Buddhist and Taoist thought, is deeply entrenched in Chinese medicine, and its true origins are most likely obscured by the passing of time.

General Yue Fei (a Song era military general, poet, and calligrapher) is often noted as the originator of the set of exercises that became Eight Pieces of Brocade as a way to keep his soldiers healthy and ready for battle.

You will see some slight variation in the stages of the sequence, or the order of the moves, but it’s not worth getting hung up on the differences – you would expect them to appear during the course of a thousand years!

The eight moves of Ba Duan Jin each offer particular benefits and as one would expect, are linked to particular meridians of Chinese medicine.

(Below is the order in which I learnt the sequence from my instructor, Master Ping of Yangshuo Tai Chi School, Guanxi Province, in China).

1. Two Hands Reach up to Heaven

Without going into too much depth (I may leave a fuller explanation for a future blog post) the body contains what is known as the triple burner. It is one of the body’s organs in Chinese medicine but can be seen as a metaphorical container for the main organs of the body, consisting of three parts – upper, middle, and lower burners, it balances and circulates Qi throughout the body, regulates the water functions, and facilitates the workings of other organs which it ‘contains’.

The first move of Eight Pieces of Brocade balances the triple burner.

2. Draw the Bow to Shoot the Eagle

This movement – as those who practice can immediately tell you – is of immense benefit to the strength and flexibility of the lower body, as well as the upper body – from the neck downwards, particularly for expanding the chest cavity . It is also great for coordination and mobility. The movement also regulates Qi in the lungs and liver.

The Qi of the spleen and stomach is energised in this exercise, aiding with the process of digestion, and the whole of the upper body is stretched – particularly on the side of the ribs and the mobility of the shoulder. The energy pathways of the liver and gallbladder meridians.

4. Sway the Head and Shake the Tail

The main function of this movement is to bring balance to the fire energy within the body. An excess of heat within the body must be balanced by sinking it down to the kidneys (water) and not allowing an excess of fire to remain in the heart.

On a more physical level, it’s one to do gently if you have lower body or lower back issues but it can bring great relief to stiff or aching backs, gluteals, and hips. It very much feels like an antidote to sitting for too long.

The twisting nature of this move will benefit the entire body by gently squeezing and massaging the internal organs, building resilience to illness and injury . The posture loosens off tension in the eyes, neck, back, hips and helps reverse the effects of sitting or standing for too long in one position.

6. Clench the Fists and Gaze Fiercely

Another great move for the strength and flexibility throughout the whole body, particularly the legs. The  application and release of tension helps with relaxation.

The liver Qi is strengthened, improving the flow of blood throughout the body, as well as increasing the strength of the tendons. The Qi of the liver is also linked with the eyes.

7. Bouncing on the Toes

The Du Mai meridian is stimulated in this move, it is called the ‘Sea of Yang’ and is the root of the yang energy within the body. The point known as the ‘Bubbling Spring’ is also massaged by rocking up onto the toes, this the Kidney 1 point is regarded as a root to the earth and is used for calming and grounding the mind and body.

8. Two Hands Hold the Feet to Strengthen the Kidneys and Waist

The waist is known as the container of the kidneys, which store Qi, are related to the health of the bones and bone marrow, reproduction, and balancing yin and yang within the body.

Stretching, massaging, and strengthening the spinal column, the move creates a circuit from the important Lao Gong point in the hands (anxiety, inflammation) with the Bubbling Spring point on the feet.

Most people that I teach go through this sequence just once and know that it is good for them – they may not yet be able to elucidate why but it just feels right!

In terms of Chinese medicine, the qi throughout the entire body has been stimulated and increased, every organ has been massaged and strengthened, every meridian stretched. With regular practice stagnant – disease and illness causing – energy will be unblocked, and you will become more resilient in your health, both mentally and physically.

On a practical level, you can practice almost anywhere and it can be performed seated as well as standing, it is very easy to learn compared to many qigong or tai chi sequences, and for those who do not have much time, if you just do the moves 3-4 times it does not take too long out of a busy day.

What is more, it’s enjoyable – you can do it alone or with partners, family, friends. In our current lockdown my partner, Karina, and I go outside and go through Ba Duan Jin together every morning (with one or two interruptions from the dog) and it sets us up for the day, sets the tone, brings some mindfulness and preparedness to our early morning – and in some way it connects us to those who are passing down the tradition through scores of generations, just as we will pass it down in turn.