In Chinese astrology my sign is a dragon, which I have to say, is quite a relief. I’d be disappointed if the cosmic alignment had timed my birth in the time of a rooster or pig (no offence) – it’s a much better selling point for a martial arts instructor to be a mythical fire breathing beast.

When comparing signs with people, it’s a conversation stopper. “Oh, you’re a Dragon”. Ok. Game over. It’s a nice comparison for me, as on this part of the globe I am a Cancer, which is usually met with sympathy – no doubt to ensure that no one upsets my moody and sensitive nature.

I usually remain entirely non-committal when it comes down to a belief in such a thing as astrology. However, some of the traits of a dragon are uncannily close to describing my character at times (the positive ones, of course) and it is said that the worst year for a dragon, is the year of the dragon – which is what 2012 was.

The entire year was beset with relationship troubles, not the best financial situation, doing a 9-5 job I didn’t like whilst trying to build up my own business and brand on the side, a car which was constantly breaking down, a poorly cat – and making everything else disappear into a dark cloud of insignificance – my father passing away after a long illness.

No doubt as a consequence of probably the most stressful year I had had to date (or since), as well as taking a lot of my frustration out on heavy weight lifting, I ended up spending most of the year with a bad back.

Nothing show stopping, I wasn’t laid up and unable to function, in fact it was worse when sitting down. I could go to the gym at lunchtime, lift heavy weights and feel fine, yet as soon as I was back in my seated position at the office that was it, sore lower back and pain down into my left hip. As my dad’s health condition deteriorated, I spent more and more time on the 400 mile round trip back to visit him and my mum.

Visits to a massage therapist and chiropractor provided temporary relief, yet at the time the relieving of £50 each time from my bank account was more of a hit than I could take.

Then entered what would become one of – if not the most – important tools in my ‘staying healthy toolbox’.

I wish I had a better story of how I was introduced to them but like many discoveries made these days, I probably asked Google. Or it was possibly so long ago that I asked Jeeves!

Either way, it’s no exaggeration to say that when I started using a massage ball regularly, it literally changed my life. I’m almost evangelical about them now and regularly give them away to students and clients who have similar niggling complaints.

Keep one at your office, in the bedroom, in the car – I’m literally never more than a few meters from a massage ball. Take them on the train, on flights, to the cinema – anywhere you might be sitting down for a long period of time and those aches and pains are liable to start creeping in.

I’ve posted a few photos below of ways to use them below and if you’re interested in following a video tutorial on White Crane Online, you can learn a routine which feels a bit like getting a massage at your desk!

Tennis balls are okay to use and tend to be a little more gentle, I generally buy them from a company called Fitness Mad on Amazon – and they sell them in packs of 3 with a soft, medium, and hard ball.

Here are just a few more ideas on how to use them: 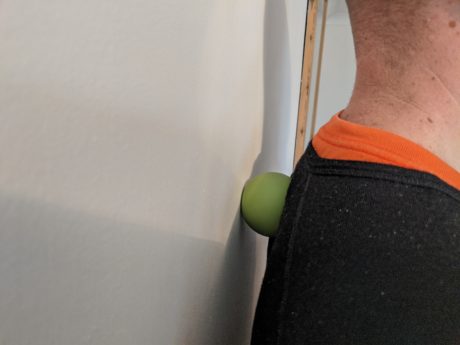 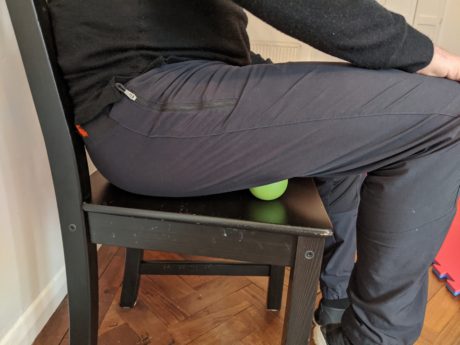 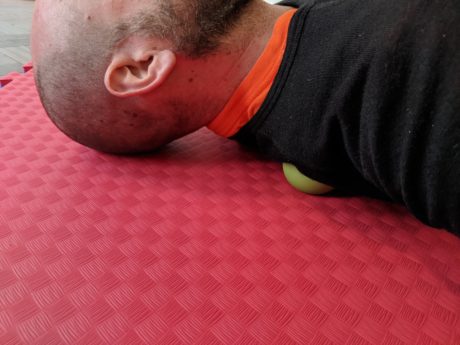 From the soles of the feet, up to the hamstrings, glutes, all the way up the back and into the neck.

These fantastic little balls can make you feel like you’ve got your own portable sports massage therapist in your pocket!

So if you’re feeling tensions rising in your life and you’re feeling them in your body in the forms of aches, pains and stiffness, get yourself a trigger point massage ball and ease those tensions away. It won’t be the answer to all of your problems but it’ll certainly make you feel physically an awful lot better!

If you’d like more ideas and inspiration on how to use them, I’m more than happy to reply to messages or emails.