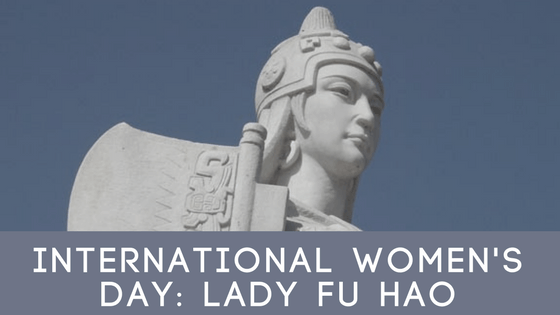 March 8 is International Women’s Day, a day to celebrate the social, economic, cultural and political achievements of women around the globe, today and throughout history, and a call-to-action for accelerating gender equality.

With this in mind, I thought it an appropriate time to write a blog post celebrating a fantastic, strong female character from China’s 5000 year history – the country’s first powerful female leader: Lady Fu Hao.

Fu Hao was one of the 64 wives of King Wu Ding of the Shang Dynasty, who reigned between 1324 and 1266 BC. She is remarkable because, unusually for a woman at that time, she served as a military general and high priestess.

Inscriptions on Shang dynasty oracle bone artefacts (markings on the inside of turtle shells) tell us much about early Chinese history, from the best time to plant crops, to the comings and goings of the royal family.

From these writings, we know that Fu Hao fearlessly led numerous successful military campaigns. The Tu-Fang, who had fought against the Shang for generations, were finally defeated by the formidable Fu Hao in a single decisive battle. Further campaigns against the neighbouring Yi, Qiang and Ba followed, and the latter is thought to have been the earliest recorded large-scale ambush in Chinese history. With up to 13,000 soldiers, and important generals Zhi and Hou Gao serving under her, Fu Hao was the most powerful Shang general of her time.

Inscriptions refer to King Wu Ding regularly instructing Fu Hao to carry out special rituals and sacrifices. This was highly unusual for a woman at that time, and shows that the king must have had held her in very high esteem.

Fu Hao died before her husband, in around 1200 BC, and the King built her tomb in the royal cemetery at his capital Yin. He is known to have made many sacrifices here in hope for her spiritual assistance in defeating the Gong. Fu Hao’s tomb was unearthed by archeologists in 1976. Her high status was confirmed by the discovery of in excess of 1000 items of jade, bronze, bone, stone and ceramic artefacts buried alongside her, as well as battle weapons.

It is unclear how Fu Hao rose to such an elevated position, in an extremely male dominated culture, singling herself out among the King’s scores of wives. She must have been a strong, ambitious lady, who inspired the King’s trust.

She is also the inspiration behind one of the moves in the single fan White Crane tai chi form – it is called ‘Fu Hao Ties Her Sash’. As I have mentioned in other posts, you can learn a lot from the names of moves – and this one gives a glimpse into a very colourful time in ancient Chinese history.

While we don’t recommend leading armies into battle this International Women’s Day, you can bring the strength, decisiveness and focused mindset of Lady Hao to your tai chi practise.  Sign up with White Crane Online today to get started in our tai chi and qigong community.