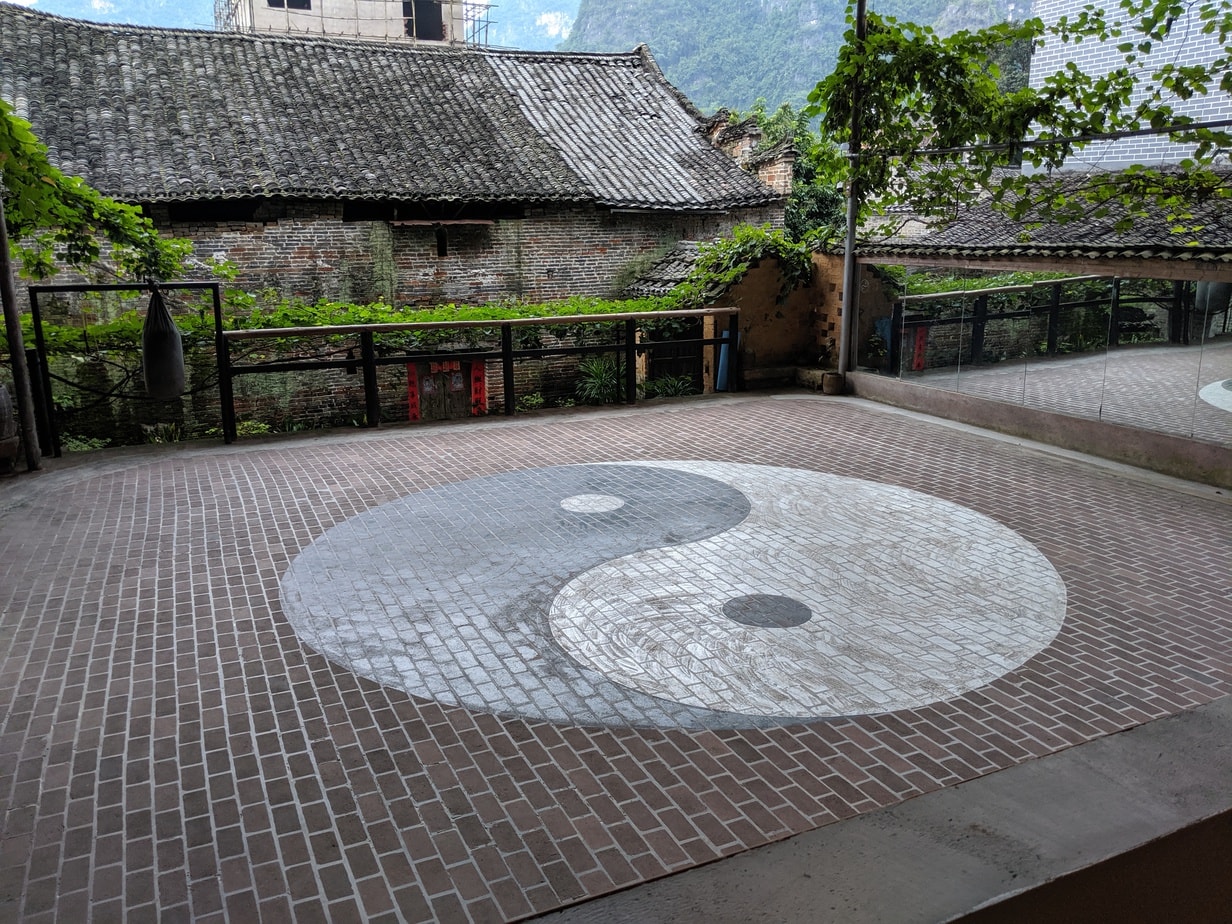 Yin and Yang are fundamental to Chinese cosmology. The symbol is a familiar one, even to us in the West, I remember trying to draw it as I graffitied my school books as a child! Even though I had no clue what it meant… ‘something to do with peace!?’ was my best guess.

My interest in Taoism sprang from a summer job I had when I was about 18 and worked in a book warehouse. If books were damaged, we were allowed to have them – for free! I can’t tell you how many books I bent corners of, tore slightly, or defaced in some way so that I could have them (it was the beginning of my avid reading phase!) – hopefully I have paid for some of that bad Karma from stealing by the mere fact that taking home my first copy of the Tai Te Ching was potentially the embryonic cell which multiplied and developed to become the tai chi teacher you have before you today!

(… that’s the case for my defence anyway!)

I still have that copy of the Tao Te Ching, slightly bent corner and all… the Stephen Mitchell translation (the best one, in my opinion).

Behind everything we perceive is something eternal, unfathomable, unnameable, hidden from us, yet always present.

Last week I briefly explained the concept of Wuji in a blog post. This week, I will explore the concepts of Yin and Yang.

What are Yin and Yang?

The ubiquitous black (Yin) and white (Yang) symbol shows us that the universe and everything in it consists of two polarities, a duality which defines all phenomena.

We can only appreciate light if dark exists, the same with male and female, love and hate, up and down, heat and cold, heaven and earth, near and far, hard and soft, active and passive… and so on.

These opposites create a whole, which is indivisible.

Each half of the circle, contains the seed of its opposing side, usually featured as a small round dot. By containing this seed, Yin and Yang have the ability to turn into one another when taken to an excess:

-Day turns into night on a daily basis

-Up can become down

With a little knowledge and imagination, you can follow the path of excess of one side turning slowly into its polar opposite.

The earliest recordings of Yin and Yang are said to stem from the I Ching, which is believed to have come into existence sometime after 1000BCE. Originally Yin was symbolised by a broken line __ __ and Yang a solid line ____

From these, the trigrams were derived, eight symbols consisting of three rows of either solid or broken lines – the top left, three solid broken represents maximum Yin – all the way across and down to the bottom left and the three solid lines which symbolise maximum Yang.

It is beyond the scope of this blog post – and in all honesty the deeper elements of it are beyond the level of my current comprehension –  but these symbols are used to represent elements of nature, astronomy, astrology, anatomy, personality, numerology, medicine – and if understood correctly explain the nature of reality.

The Taijitu – which we tend to call the Yin/Yang symbol appeared in the Song dynasty, in the 11th Century CE. It is by far the more commonly known way of representing the duality of nature and all phenomena within it.

Those familiar with the Tao Te Ching (or possibly my previous blog post) will remember that the duality springs into existence from Wuji, meaning emptiness.

In Chinese cosmology, from the Taiji symbol are derived the 5 Elements, which go on to further explain the natural world – this will be the topic of my next blog post.

Yin and Yang in Tai Chi

As well as turning into one another, Yin and Yang can be further subdivided – I would imagine to a subatomic level!

If you take the Chinese martial arts of tai chi and kung fu, you would definitely categorise tai chi within the Yin (dark) side of the circle and place kung fu as the Yang (light) half.

However, if we extrapolate out from our Yin tai chi you would further categorise some tai chi forms as more Yin and some as more Yang. I would say that a sword form is more Yang than an open hand form. The Chen style of tai chi as more Yin than the White Crane style.

Furthermore, within a tai chi form itself, some elements will be more Yin and others more Yang. In the White Crane tai chi form, ‘Shuang Yang’ there are several jumps and faster moves which you would see as being Yang, as opposed to the majority of the soft and gentle form, which if very Yin  – but still on the whole more Yang than the Chen form 🙂

As I suggested… the subdivision of Yin and Yang can get quite intricate!

This is a perfectly natural question to ask yourself once you’ve grasped the basic concepts a little. What is the relevance?

In practical terms we learn that an excess in anything will lead eventually to its polar opposite:

-Put too much weight on one leg, lean too far to one side, and you will be off balance – standing turns into falling, up becomes down!

-If you are too rigid the energy will not flow and you will not relax, if you relax too much you’ll end up a puddle of relaxed jelly on the floor.

-Breathe too deeply and you will not be able to catch your breath and it will become shallow again.

-Push hands is a perfect example of Yin and Yang in action: to push is Yang, to yield is Yin. Go too far one way or the other and you will be off balance.

-In sparring if your opponent is very direct (Yang) counter with circular movements (Yin), and vice versa.

It is all about finding – or eternally seeking – the perfect balance point in everything. Of course, this never happens, we are imperfect humans!

I am a huge proponent of conducting thorough research on the historical and philosophical background of what it is you are learning – it’s interesting, fun, enriches your experience, and makes you much more knowledgeable in your chosen field.

When you are performing your forms or techniques, having such an appreciation adds to the feeling of truly understanding the essence of what it is you are doing.

Tai chi is not merely waving your arms around slowly and improving your balance. You are connecting with thousands upon thousands of years of collective knowledge and learning in cosmology, you are living and breathing a history and tradition which is so much bigger than you are, it’s humbling to be a part of, it’s our duty to develop it and pass it down – it is as alive as we are!

If we are all tiny strands in the fabric of reality, then an art such as tai chi is a thread which weaves its way through us, should we choose to delve deep and allow it.

Thank you for reading – I love comments, feedback, discussions – so feel free to reach out should you feel so inclined 🙂

2 responses on "Yin and Yang"