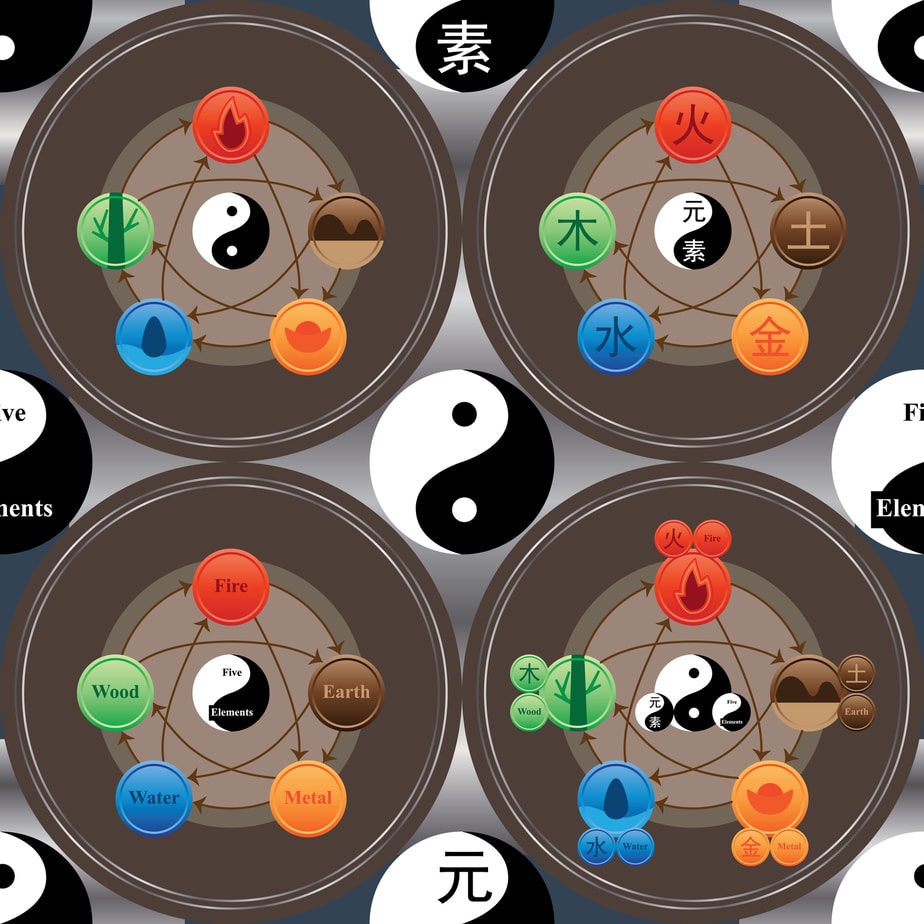 The previous two blog posts in this Taoism series have explained the concepts of Wuji, and Yin-Yang. Respectively the unseen, unfathomable void from which all existence springs (Wuji), and the duality of natural phenomena which gives it its definition (Yin-Yang).

Our next step in our journey of understanding Chinese thought is to get to grips with the 5 Elements and how they interact to further explain the universe around us – as well as Chinese medicine, martial arts, philosophy, history, astrology, astronomy, cuisine, geomancy… to name but a few of the defining branches of what we can think of traditional Chinese culture.

The 5 elements represent the different stages of a cyclical process… for example, the seasons (yes, I know there are 4 but I’ll come to this), as well as the inter-relationships between all phenomena, including how the internal organs interact, movements in martial arts, the tea ceremony, emotions, smells, tastes, cuisine, and even how the dynasties of imperial China succeeded one another.

Most commonly referred to as 5 Elements, a better translation of Wu Xing is 5 Phases, or 5 Movements.  They are:

Each phase has many correspondances, according to what they are being used for.

For example, when talking about directions:

The 5 phases are closely related to nature and describe the seasons accordingly:

Wood is Spring = a time of growth, rebirth

Fire is Summer = a time of heat and flowering

Water is Winter = a time of storage, retreating, even death

So what about Earth?

This can be seen in two ways. In China, the changing of the seasons is very significant, particularly in terms of Chinese medicine. Earth in one respect can be seen as a period late in each season which is to do with the changing of one season into another.

Alternatively, there is a late summer period, which is a transition from summer into autumn. This is also said to be Earth.

Yin-Yang theory (which I wrote about in last week’s blog) pre-dates references to the 5 Elements, which are first recorded in the Warring States Period (476-221BCE).

It’s interesting that around the same time in Greece, Hippocrates (the father of – Western – medicine) also wrote about classifying phenomena and processes into elements, slightly differing to the Chinese way, but clearly showing that a scientific method of sorts was being developed side by side. (Unless there were links that we as yet know nothing about!)

In a book called the Shang Shu, the 5 Elements were described as follows:

Wood can be bent and straightened,

Metal can be moulded and can harden,

Yin-Yang theory was developed by a philosophical school called the ‘Naturalist School’. Early on, the theory was used by philosophers, as well as rulers of China, to make political decisions and even predict how rulers were succeeded.

When China’s first Emperor, Hang Di (AKA the Yellow Emperor), came to power it is said that large earth-worms and ants appeared. Therefore it was said that the element Earth was prevalent. Subsequent rulers and dynasties would be associated with an element and important decisions, such as those relating to succession and ceremony would have been taken on the back of how philosophers interpreted the 5 Elements in relation to events at the time.

From its political beginnings, the theory of the 5 Elements slowly began to pervade the entire gamut of Chinese thought, and it took its place alongside Yin-Yang theory.

The 5 Elements can be seen as stages of a cyclical process – most notably the seasons, as we saw above.

Additionally it is important to understand the interrelationship between all of the phases. Mathematically there are 36 different ways that the 5 Elements can be arranged (I looked that up, didn’t work it out myself!).

We are going to look at the two briefly at most commonly known and relevant to the martial arts –  the creative and destructive cycles.

In the creative cycle, each element arises from the preceding one:

The controlling, or destructive cycle is as follows:

The creative and destructive cycles model how a balance is created between the 5 Elements. It is applicable to natural processes, particularly the organs and treatments in Chinese medicine.

Where our interests lay though in this blog, are in the relevance to martial arts and everyday life.

All of this ancient Chinese philosophising is all well and good but what relevance does it have any why should you at least be aware of it, if not delving deeper into a study of it?

Well for a start, if you are an adept, or even a layman with a passing interest in Chinese medicine, making yourself familiar with 5 Element theory will help you understand how medical professionals in this field are treating you, and why. I’d always recommend a blend of Eastern as well as Western medicine when it comes to taking care of your mind and body, the two are the Yin and Yang of healthcare – and to be sure, we need a balance of both!

If you wish to understand Chinese history and culture better, understanding the underpinnings of the fabric of their society, goes a long way to wrapping your head around what can often seem incredibly enigmatic.

If you are interested in Chinese martial arts and wish to look a little deeper into the art and philosophy behind all of those awesome techniques you learn in your classes, understanding how 5 Element theory works can be worthwhile – and a lot of fun. Honestly!

Welcome to The Matrix!

The above table is a matrix of  the 5 Elements and some of their qualities.

By studying this, you could potentially learn how to attack and counter according to 5 Element theory!

Now let’s take a Fire attack – a fast, rapid attack, something akin to Wing Chun chain punching. Looking at the destructive cycle, you would ideally counter that with a Water move, something flowing and penetrating. My White Crane Tai Chi beats your Wing Chun attack 🙂

To me this makes sense, I would prefer to see that than a Metal attack of a hard, linear strike, almost matching what was being thrown your way, which becomes a game of who hits faster and harder in a straight line, not an intelligent game of chess based on thousands of years of tradition and an in depth understanding of how the universe works. Remember, you don’t just want to defeat your opponent, you want them to understand that you have the universe on your side too 🙂

From the table you can see that Earth absorbs Water, which in turn extinguishes Fire – an Earth defence of a Fire attack would also work well (also, Fire creates Earth), a heavy/grappling based attack would be a perfect counter to a fast Fire attack (if you get there first!). See any Khabib Nurmagomedov fight in the UFC for a prime example of this – he’s an absolute master of making an opponent feel as though he’s slowly being buried under a mound of earth! (Personally I love watching this slow dismantling of an opponent in martial arts competition!).

Going even further, if you were to become a real 5 Element master, you could potentially sense the smell of your opponent, notice what colour they had chosen to wear that day, hear the tone of their voice and deduce that their liver (Wood) was weakened – then attacking with a hard, linear Metal attack.

Is it likely that one can master this and be able to calculate every potential? Personally I’m not sure, probably not! But even grasping a rudimentary understanding of it can help (Earthy smothering attack, is a good defence against a Fire-like direct attack). However, there are so many other factors which come into play, that nothing of this nature can be an exact science.

To conclude, I would say that whether it’s for health, martial arts, or just for fun, studying and learning about 5 Element theory is a worthwhile undertaking. It really makes you think! Sometimes it seems as though the connections and links are somewhat arbitrary but with a little imagination you can see how logically it is all put together and as with Wiji and Taiji theory it gives you a glimpse of what an immensely advanced body of work developed in this part of the world thousands of years ago, and one which sprang from a deep understanding of nature and the world around us.

2 responses on "The 5 Elements"